Rich Bland, our Creative Director comments on how communications has changed with society but the need for creativity has never faded. 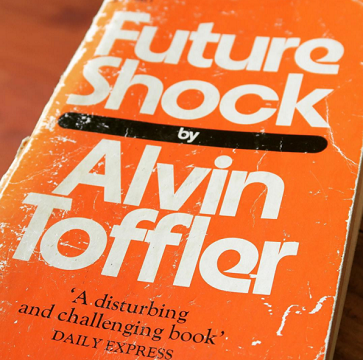 Rich Bland, our Creative Director comments on how communications has changed with society but the need for creativity has never faded.

Way back in 1970, the futurist and author Alvin Toffler wrote his seminal book on the effects of rapid change on people and societies. I’m among the over 6 million that bought it, and its ideas have stayed with me ever since.

Toffler believed that the constantly accelerating rate of structural change in society was, and would, increasingly cause “shattering stress and disorientation”. He even went so far as to say that the majority of social problems were symptoms of a society that was ‘future shocked’.

Nearly 50 years later this accelerating rate of change, for some at least, has certainly continued. As we’ve all read, it’s estimated that more change will occur this century than in the preceding 20,000 years, and after that, who knows.

Change within communications has been equally rapid and dramatic. The pillars of conventional marketing have crumbled and the relationships brands have with their customers have been turned on their heads, empowering consumers in a way few could have predicted. Traditional media may still be all around us, but personal media is where most brands are now slugging it out.

There is, however, one thing that hasn’t changed. The need for creativity. In fact, it’s arguably more important now than it has been for 20,000 years! Intelligent, creative ideas are the electricity that powers engaging communications.

With the myriad of consumer touch points now at our finger tips, consistency, the back bone of most successful brands, has also become much more important. Brands that constantly reinvent themselves through their communications leave consumers disorientated. If the brand doesn’t know who it is, what chance does the consumer stand?

A great example of successful consistency is the Red Bull energy drink. Back in 1987 it launched its ‘gives you wings’ campaign and has stayed true to this thought for nearly thirty years, constantly finding new ways to express its big idea. And this is the critical point that Red Bull has recognised. Creativity isn’t just about constantly doing things differently, it’s about doing the same things in an unexpected way. And whilst its media channels may have changed, Red Bull has stayed true to itself. The brand is now worth an estimated £6.5b.