We continue to invest in young people with our thriving internship scheme which has more than doubled in size over the last year. 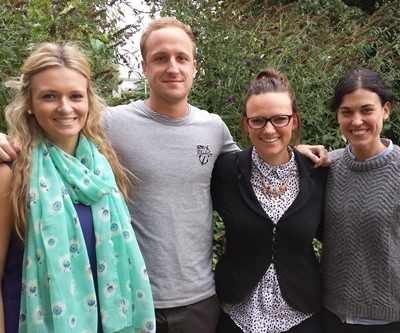 In the last two years, after hiring from existing national and international internship schemes as well as direct applications, we have seen 11 interns come through the doors at KISS to get hands on experience in advertising, marketing and PR across the B2B and B2C sectors.

This includes three new international interns who joined from Spain, Brazil and France as part of the Leonardo de Vinci Programme, an EU-wide scheme designed to promote training and skill acquisition abroad.

We have also been working on a local level with Cambridge Regional College and recently hired an apprentice, 18 year old Lacey Thornton who has taken an Administrative Assistant role.

Full-time permanent employment contracts were also offered to three previous interns, including Amy Sadler, Josef de Pfeiffer and Anna Santamaria, following successful paid internships. Josef, who was one of our first interns, has been promoted twice and is now an account manager, working on some of the agency’s biggest clients.

The agency also welcomed back Natasha Nealon as a new Account Manager, four years after completing her internship with us.

“I completed an internship with KISS in 2010. The experience I gained through my internship helped kick-start my career in account handling and after getting to grips with an office environment I became hooked on the agency buzz. After spending four years away, I have come back on a permanent basis to where it all began.”

We are continually on the lookout for ambitious and enthusiastic young individuals to join the team. Placements are currently offered to graduates, under-graduates and those in their final year at school. Direct applications can be made to Finance and Administration Manager, Liz Wainwright (contact details to be found on the website) and international students can apply via the Erasmus + programme, the new EU programme which replaces current funding programmes run by the European Commission.

Our PR Managing Director, Justine Smith said: “We strongly believe that supporting the next generation is key to growing our business. Giving young people the opportunity to learn on the job means that we can help to nurture a pool of ambitious, bright and creative young people to become part of the agency from the beginning.”