Animation can often be a powerful and emotive way to capture and audience. Rich Gough, our keen Content Executive, came across a short film-style advert that inspired him. 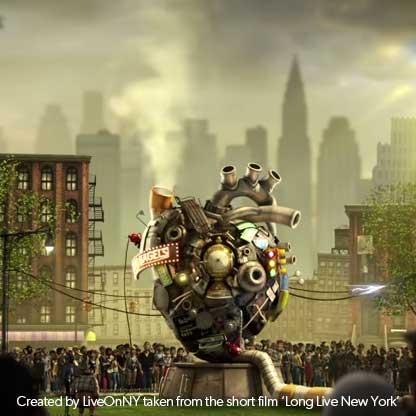 The animation portrays New York as a crumbling and dying city. With the streets darkening, and the Grand Central Station clock stopping, a powerful metaphor is created for all New Yorkers. By the end of the film everybody comes together to get the beating heart of the city pumping again, followed by the caption, ‘Keep New York Alive’.

How does the animation element work so well? Within 1 minute and 30 seconds, we have not only been engaged, but we have been through a whole range of emotions as this famous booming city is portrayed as empty, lonely and helpless. When the audience is at their most exposed, the true message is delivered with three simple sentences, reaching out for the viewer to become an organ donor.

Animation has the power to take an audience out of reality. It allows for an injection of creativity and encapsulates the message through metaphor, making it strong and impossible to overlook. On top of this, the audience’s full attention is on the content and the message, rather than being distracted by a characters looks and acting abilities.

Childish as animation might seem, we can’t underestimate the power of animation when tackling the most sensitive of subjects. It’s a simple, entertaining way to communicate – and always will be.

We’d like to hear from you! Do you feel by using animation this made the message stronger? Tweet us @KISStalk

The power of video