One of our Account Executive, Alex, heads into the long grass to find out why Pokémon Go is everywhere. 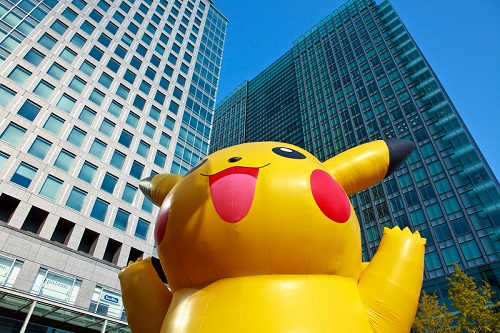 One of our Account Executives, Alex, heads into the long grass to find out why Pokémon Go is everywhere.

The KISS offices had never seen drama like it.

“Don’t move,” I excitedly warned my colleague seated nearby, holding my phone aloft like an explorer wielding a sextant, “There’s a Pidgey on your lap.”

Even a month ago, such a proclamation would’ve been met (quite understandably) with bemusement, concern and perhaps a quiet referral to HR. But since Pokémon Go, the augmented reality game that inserts those ubiquitous pocket monsters into your everyday world, exploded onto the scene, it’s become practically de rigueur to interact with unseen critters. The game is everywhere.

People stop in the street, whisking out their phones and spinning round in unison like an ill-planned flashmob. Otherwise hip twenty-somethings now pose with purple cartoon rats on Facebook feeds. And brands across the spectrum, from book stores to restaurants to New York police departments, are posting their latest Poké-antics.

It’s the kind of engagement everyone is seeking, and though there are a few different factors sparking the success of Pokémon Go – an established brand, the relative novelty of augmented reality, the ease of mobile gaming versus ‘traditional’ gaming – they all feed into that overarching clincher: social.

Social is something marketers can no longer skirt around or dip their toes into every now and then. It has become a fundamental part of a brand’s success. Would the launch of a mobile game, even one built around a brand such as Pokémon, have created such a furore, such a sense of community, such an outpouring of memes and jokes, without embracing the social element so wholeheartedly?

Like news, politics and media before it, social has become the bedrock of Pokémon Go. It’s what engages people beyond the initial thrill of watching a bipedal lizard swaying about aimlessly until you put it out of its misery by imprisoning it in a ball. It ties the game to the everyday life of the user. Familiar places become hunting grounds that you can share with friends. Everyone gets to have an experience unique to them, while at the same time being just like other people’s.

And as with social media, Pokémon Go integrates itself into the things you were doing anyway. Monday becomes Pokémonday. It wheedles its way into the daily news narrative, whether it’s helping someone stumble upon a corpse or raising concerns amongst children's charities about the potential dark side of the game. The buzz hits the mainstream, and makes existing users feel even more invested in the world they’re a part of.

It’s an evolution of another recent augmented reality hit: Snapchat’s Lenses, which superimposed various effects over the face of the user – open your mouth, and you watched yourself spewing rainbows like an even more horrifying version of The Exorcist. The novelty would not have lasted long had you not been able to share the experience with your friends.

Seeing how different people looked, flinching at the latest ghastly creation from this digital island of Dr Moreau – social was an intrinsic part of the appeal. It extended the lifespan of the concept. People shared in an experience that was still fundamentally personal to them.

Cast your mind back to those named Coke cans too. Dave, Teresa, Jeremy, Tim, all lined up in a row, ready to be plucked from the shelves by their delighted namesakes as though the can was made specially for them (and the millions of other Daves strolling about). We snapped pictures with our cans. A shared experience, unique to each person but the same for each person.

And now Pokémon Go, wanting to be the very best of them. Games and social have always had a history together, whether it was a bunch of kids huddled around a TV or watching your uncle flail an imaginary tennis racquet with grim intensity during Wii Sports. An experience shared is an experience extended, invested in, enjoyed more. Gaming has always understood this. Pokémon Go just took the next step.

How long will Pokémon Go go? Like all crazes, the initial hubbub will die down, and as the great British winter rolls around people might find their enthusiasm dampened by the prospect of trudging around an industrial estate in heavy sleet in pursuit of yet another Voltorb.

But if the social aspect continues to engage, and if new elements are introduced to keep the formula fresh, then Pokémon Go has the creative foundations to endure. Good news for the businesses using it to drive custom and improve PR; good news for the marketers currently exploring how to turn the game to their advantage; and good news for the millions of people who have found an experience they can share together, offline and online. The power of social in action.

Why it’s never too late to learn digital