You don’t have to spend much time browsing the news to come across a host of big problems facing the world. But while it can be easy to get caught up in the doom and gloom, taking a fresh look at an issue, however difficult to solve it might initially appear, can often turn up new ideas – especially if you look a little sideways. 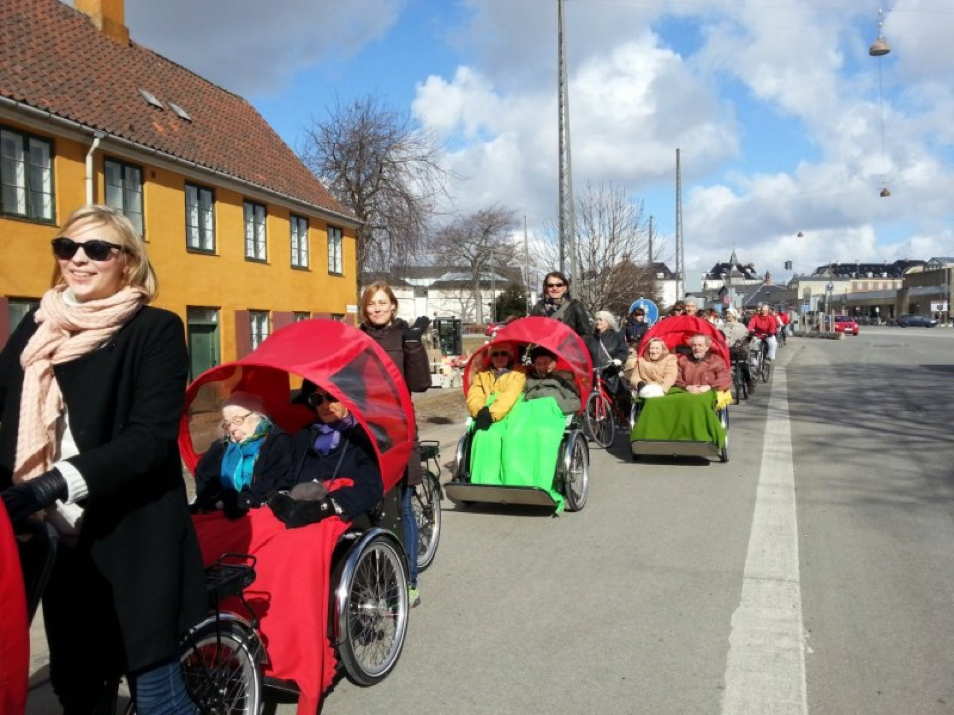 We’ve spotted some examples in health and care that got us thinking.

A UK NHS hospital was planning to pilot a ‘hosting’ scheme where, between hospital and home, patients who need only limited help could move to nearby houses and stay in suitable spare rooms. Security-checked hosts would provide basic support such as a bathroom and warming up prepared meals, and could call for fast medical help if needed. The hospital would free up £500-a-night beds and local hosts would earn some money from their spare rooms – perhaps up to £1000 a month.

The Brits aren’t the only ones seeking innovative solutions to what have been growing wellbeing issues. Some Dutch homes for the elderly now allow students to live there for free in return for some hours working as companions and basic assistants. Hours are flexible and all involved seem to be enriched by the experience.

Meanwhile, a Danish cycling charity has started taking elderly residents on cycle rides in pedicabs. Local volunteers get to help and get exercise at the same time, and the passengers get some fresh air. As a cycling city (car ownership is about 25% and Copenhagen has more bike commuters than drivers) this is a natural step, despite a rather cold climate.

Old problems
What all these ideas had in common was a ‘lightbulb moment’ that came about when someone took a problem that had been around for a while and looked sideways at it.

In October, Age UK warned that increasing numbers of elderly and frail patients were being ‘marooned’ in hospital beds, despite being medically fit; NHS figures show that last year, 2.2 million hospital bed-days in England were lost due to delayed transfers of care.

The elderly of Copenhagen really benefit from being outside and most were lifelong cyclists, but taking them out needs extra bodies. Many elderly people in homes really welcome company and younger faces around, but there isn’t budget to pay them.

None of these are new problems, but innovation – which usually involves breaking the issue down, being very clear about your goals and getting some fresh minds to take a sideways look at the problem – surfaced new ways to meet the goals in a cost-effective way.

It can be the same with your marketing budget: being more effective (at, say, lead generation) may not need a massive budget increase, it could come by smarter use of the resources or data ‘gold mines’ you’ve already got, or key contacts of yours that you hadn’t realized could help. Getting someone who has a different perspective on things might just give you the spark of inspiration you need to crack the problem.

Beware naysayers
It’s not hard to find downsides to some of the examples I gave. The hospital’s idea was immediately slammed as ‘Airbnb care’, driven by desperate, cash-strapped NHS trusts. Some worried that patients would be at greater risk by being out of direct sight and that their hosts would be unsupervised and untrained.

At this stage, the hospital seems to have backed away from the idea because of so much negative attention. There’s no doubt that the concerns are valid, but many groundbreaking ideas start out in the face of opposition. The solution is usually a one of common-sense and compromise: identify any risks, be aware of them, and proceed sensibly. Pilot things quickly to find out which options work, starting small-scale, stopping any that fail and stepping up the ones that work.

The success of innovations often relies on several other factors as well. A clear win-win helps: locals near the NHS hospital may host because they enjoy it, or for the extra cash. Some Danes clearly get a lot out of ‘giving back’ by volunteering, and have the time to do it. Students welcome a warm bed and food cooked for them, especially when it’s free.

In addition, all the costs here are are minimal (in the NHS case, a rapid saving after some modest setup costs) and the ‘lightbulb moment’ mainly involved thinking about new ways people might live, earn or spend their time. No blockbuster investment is required, reducing the barriers to implementation.

When it comes to injecting some fresh thinking into your marketing, taking a sideways look can bring up some surprising solutions. Whether it’s bikes or beds, you never know what’s going to change things for the better!